Sugar Roy and The Fireball Crew

Suga Roy & Conrad Crystal started out as a duo and put in a lot of work together but with an additional member to the group (Zareb), they became Suga Roy & The Fireball Crew with the Band in 2012.

2013 saw the first album Mediation under the name Suga Roy & The Fireball Crew. On November 4, 2016 the second album by Suga Roy &The Fireball Crew Conrad Crystal & Zareb entitled Honoring The Kings Of Reggae was released.

Presently creating a massive buzz is the track from this album entitled “Trouble” by Suga Roy, Jah Mali, Sizzla Kolonji and The Fireball Crew.

It is evident that a vast amount of time and effort was spent on production quality while recreating and putting together the right elements to deliver this Foundation Roots Reggae album.  This is a body of work that inspires deep and pure meditation which signals to have an infinite life span.

Before fate brought them together, however, each artiste was already heading for stardom.

After leaving school in 1990, Suga and longtime friend, Jahmali, moved to the music capital of Kingston hoping to get a break in the music business. It was rough going, but Suga persevered, and in 1993 he recorded his first single for Xterminator’s Fun Time label titled ‘Woman Mi Proud A Yuh’. His first big hit came in 1996 on the True Friends label titled ‘Postman’, for producer Kenroy Fisher. That single earned him a stint on the Sting stage that same year.

He then moved to Bobby Digital studio and he and Jahmali recorded ‘Yuh Can’t Fool Jah’. On the Bobby Digital label he also did ‘Love How Mi Flex’ and a combination with Lukie D titled ‘Rope Dem Een’.

Suga went on his own in 2001 and set up his own Fire Ball Records label. His very own production, ‘Dancehall Nice Again’ on the Wanga Gut rhythm, came that same year.

The success of ‘Dancehall Nice Again’ earned him another Sting performance in 2001, followed by the release of his debut album of the same name for the Miami based Brickwall Records.

Loving the production business so much, he began producing other artistes, putting his DJ career on hold. He released some successful recordings on his own label, among them Anthony B’s ‘Good Cop’ and Capleton’s ‘Can’t Tan Yah’, also on the Wanga Gut rhythm.

Suga had a natural love for old rhythms and did a lot of remakes of some reggae and dancehall classics. For a number of years he was caught up in the studio producing and recording other artistes, but in 2004 he decided to fully revamp his DJ career.

Singer CONRAD CRYSTAL was born Conrad Constantine Hunter on May 22, A product of Kingston 11, he was schooled at Rusea’s Primary and Norman Manley Secondary. His interest in music developed from primary school days when he used to perform at class parties and school concerts.

He honed his craft around area sound systems Romantic and Papa Jaro. Crystal’s first recording and big hit came in 1986 titled ‘True Love’ for the Sonic Sounds and Legal Light labels, produced by Michael Jeffreys. That was followed by ‘Red Eye’ for Black Scorpio, ‘Health, Strength & Power’ for Bobby Digital and ‘She Keep Me Warm’ for Xterminator.

The DJ and singer duo continue to join the forces of the generations, while stamping their class on a music industry that craves positive role models.

Singer ZAREB was born Ranford Mc Gurdy in Clarendon, Jamaica, and left the parish of Clarendon when he was sixteen to live in Kingston where he began going to several recording studios.

After singing cover songs of his major influences Half Pint and Junior Reid he met Fantan Mojah with whom he recorded many duets under the name of Mr. Flash (such as ‘Rastafari Is The Ruler’ and ‘Authentic Love’ both in 2005). After changing his name to Zareb in 2006, he released his first album “Authentic Love” on German label Pow Pow Productions.

Zareb began working with Suga Roy on many projects since 2012 but he officially join the group Suga Roy & The Fireball Crew in 2013. 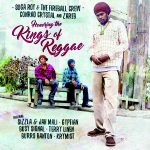 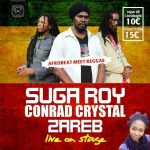 Sugar Roy and The Fireball Crew